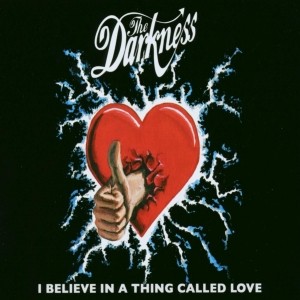 “I Believe in a Thing Called Love” was originally issued as a 3-track EP in August 2002, however, as only a small number of copies were printed, it was ineligible to chart. The EP also included early versions of “Love On The Rocks With No Ice” and “Love Is Only A Feeling”. When released as a single in September 2003, it was beaten to number one by The Black Eyed Peas‘ “Where Is the Love?“. Lead singer Justin Hawkins performs much of the song in head voice. In March 2005, Q magazine placed “I Believe in a Thing Called Love” at number 47 in its list of the 101 Greatest Guitar Tracks. It is also placed 493 on The 500 Greatest Songs Since You Were Born on Blender magazine. Most recently, it ranked at 276 of Pitchfork’s 500 Top Tracks of the 2000sand was ranked number one for Classic Rock Magazine’s list of “The Greatest Rock Songs Of The Noughties”. The song was also named the 94th best hard rock song of all time by VH1. A live version of the song, recorded at Knebworth House in Knebworth, Hertfordshire in 2003, was featured as a B-side to the group’s Christmas single, “Christmas Time (Don’t Let The Bells End)”. The song peaked at #1 on the US iTunes rock chart and at #67 on the Billboard Hot Digital Songs chart in February 2012, after Justin Hawkinsappeared in a commercial during the Super Bowl XLVI.  It has sold 647,000 copies in the U.S. as of February 2012.