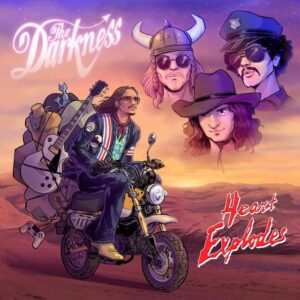 Hot on the heels of the release of ‘Rock And Roll Deserves To Die’ from the upcoming concept album ‘Easter Is Cancelled’, The Darkness share their joyous new lyric  video to second single ‘Heart Explodes’.

Having been featured in Spotify’s New Music Friday, the ambitious track accompanies an animated lyric video that draws upon powerful thoughts.

Justin Hawkins explains the single “is about the despair of change. Having to reappraise your life and what you’re holding on to. It’s like that feeling when you just want to go for a swim and keep going. Wanting to be enveloped by something that will gradually pull you down. If you really, really want to survive that process, you can.”

Watch the video for ‘Heart Explodes’ below.

Pre-Order the album now and get instant downloads of ‘Heart Explodes’ and ‘Rock and Roll Deserves to Die’.