Rock is dead, people say. They say this because EDM and hip-hop headliners rule the festival stage, and when a rock band is seen anywhere on stage, it’s always dismissed as a legacy act. When people say this, they’re stupid.

Show Review: The Darkness with Diarrhea Planet at The Regency Ballroom, 3/31/2018 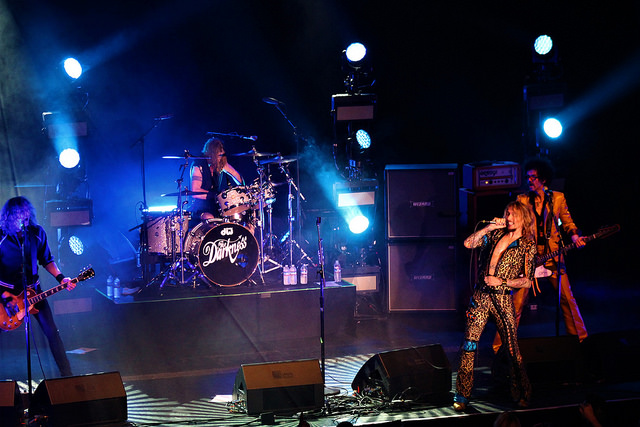 Rock is dead, people say. They say this because EDM and hip-hop headliners rule the festival stage, and when a rock band is seen anywhere on stage, it’s always dismissed as a legacy act. When people say this, they’re stupid. , but Iif they need convincing, here comes a tour that gives a big giant fuck you to the concept. For rock isn’t dead, and The Darkness is here to stick their big giant riffs in your face in the name of rock and roll.

Diarrhea Planet, the (some might say) poorly named Tennessee band, is on the road with The Darkness, and they truly believe in thisthe mission. They bring not one, not two, not three, but FOUR guitars on stage with them for a full frontal assault of power chords. The Regency Ballroom has a tendency to get a little boomy at times, and because of this, the band sounded like energetic mud with a great drummer. The entire band bounced around the stage with glee, but if they were singing lyrics, I couldn’t really tell. A small group of fans who I affectionately named Shitheads created a tiny circle pit of joy in the middle of the floor that grew slowly throughout the all-too-brief 30-minute set, and the night was off to a raucous beginning. 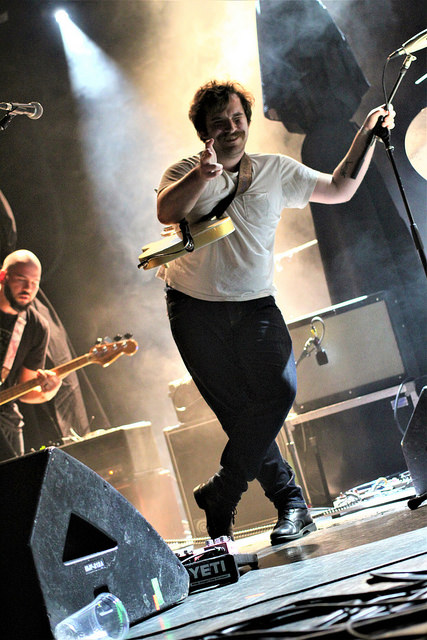 Soon, The Darkness would take the stage, and immediately we all knew we were in the presence of greatness.  As the band launched into their AC/DC tinged “Open Fire,” arms were sent flailing throughout the venue as the dedicated Darkness faithful started shouting the chorus to the rooftop. And for the next 90 minutes, the onslaught would not stop.

Justin Hawkins, the frontman of the band, is both a throwback to the greats of British glam rock and a unique talent all in his own. His falsetto attacks fool all in his wake that they, too, can sing his parts. A thousand people singing “get your hands off of my woman, motherfucker” has a certain charm on its own, but when all of us are singing it in our worst high-pitched voices, a weird connection occurs between strangers. None of us can sing these parts, but we’re all trying. A thousand punters trying to sing the chorus of “Barbarian” and failing at it.

The rest of the band hangs back on the stage without taking a backseat. Lead guitarist Dan Hawkins plays monstrous riffs in a casual manner, as if he can toss them off in his sleep. He’ll come forward to the front of the stage as if playing brain frying solos to him is like washing the dishes for the rest of us. Oh, did I melt your face off with my guitar? No big deal.

The rhythm section of Frankie Poullian on bass and Rufus Tiger Taylor on drums lays down a heavy beat throughout, and each get extremely brief moments to take center stage. Frankie led us into the raucous singalong “One Way Ticket” by pounding away on a cowbell, theatrically waiting to start for a moment as the crowd cheered “more cowbell” because no one can think of anything else to say in front of a cowbell. Taylor was called out before he was given a drum solo that was the length of a short fill. But together, they’re a solid backbone and the band is better for them. 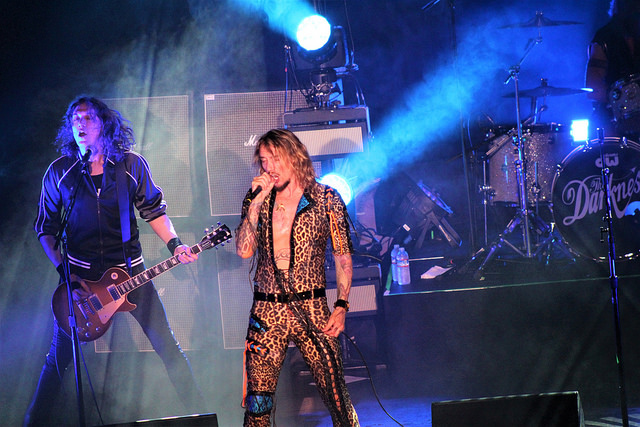 Later in the evening, someone would tell me that they were sick and weren’t giving it their all. To this, I scoffed, for I don’t think The Darkness knows how to do anything at less than 100%. Everything is all fun, all loud and all aggressive. There are no half measures here.

And now, sadness reigns, for I won’t be seeing The Darkness again tonight. Wherever you are, if the opportunity arises, be sure to see them because they will bring joy into your life. You will bounce, you will sing high notes poorly, and you will feel the power of rock course through your veins. Rock is here, wherever The Darkness are.

Japanese Prisoner of Love
I Believe in a Thing Called Love